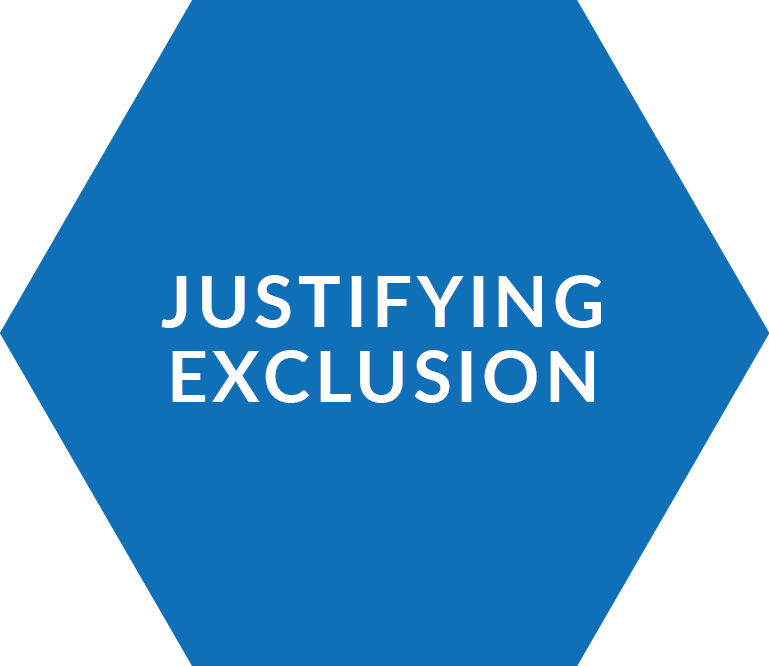 Over-sharing can have detrimental effects. It can trigger unwanted consequences through disclosure and affect trust among stakeholders. In such cases, it is important to consider whether controlling access or even excluding particular stakeholders, might wield more benefits than disadvantages for the goals at hand.  Strategies based on the minimisation of data and ensuring that only the data relevant to a specfic purpose is shared can help to justify excluding unaffected parties.  These can link back to the risk assessment policies of the data protection impact assessment.

What are the motivations and benefits of excluding a stakeholder from the collaborative information management system? Do they outweigh the disadvantages?

Are you sharing only the data you need to in order to achieve a purpose with only the persons who need to access this data?

If exclusions are implemented, how do they take into consideration legitimacy concerns or power imbalances?

Exclusion needs to be considered both at the level of data access and at the level of system architecture. Blanket sharing and access to all groups could be highly problematic because of the potential for compromised information and conflict. In particular, providing access to the public, the media, volunteer groups, or even NGOs can be an issue of great concern among emergency managers. Furthermore, including groups that are seen to warrant different levels of trust could undermine trust within the whole of the collaborative information management system and the information it provides. At the same time, it is important that such a system is not set up in ways that routinely excludes potential stakeholders and local knowledge, as that could inscribe discrimination and injustice. Also, excluding publics can generate mistrust and increase public activism.

At the level of architecture – since a collaborative information management system, by nature, has to function on some sort of taxonomy and classification system – its ordering structures have the potential to sort responders and the public into specific categories of action, privilege, and responsibility in ways that might not work in every locale and context (social sorting). Standards can also make it difficult to see how to include a new stakeholder that does not cleanly fit into the present standards of practice, potentially leading to their exclusion and distrust. By consistently favouring one set of values/framings/voices over others, the system risks perpetuating value imbalances. Hence it is important to be aware and reflect on such risks and account for any exclusions and their resulting disadvantages and to allow enough flexibility in the system to be able to exclude and include unforeseen stakeholders.

But trust and sense of relevance need a certain amount of structure to consistently emerge. While there is a need for bottom-up type interactions that acknowledge and engage with the local and national differences, there is also a need to provide some framework through which to exclude and include different stakeholders in ways that can encourage trust by their engagement with the system.

In the aftermath of the Boston Marathon bombing, ‘volunteers’ gathered on social media platforms. Tapia and Lalone (2014) discuss how the FBI initially saw this as the first “crowdsourced investigation”. Reddit and Anonymous collected and organized relief for victims, collected photos and videos taken of the bombing scene and created online mechanisms for the analysis of images collected online. Both groups created online mechanisms to share and analyze data. They also used their large numbers and the affordances of the Internet to produce an answer to the question, “who was the perpetrator, and what kind of bomb was used?” The actions of these two groups were very much in the public eye. However, they falsely identified the potential perpetrators, leading to great distress for the parents of a young man who had gone missing. In the light of such experiences, some responders raise questions about trust and responsibility in collaborative information management and efforts that include volunteer organisations. In particular, the fact that volunteers do not share similar training, responsibilities for the reliability and accuracy of data, and are not formally given authority could mean that some formal responders may question the extent to which the volunteers can be trusted to not pose a risk to themselves and to others. However this perspective is also challenged by many responders, who argue that volunteer organisations, as well as ‘spontaneous volunteers’ can hold important local knowledge and are able to mobilise quickly and effectively, stressing that the readiness of traditional disaster management efforts to quickly exclude such ‘unconventional’ stakeholders can be to the detriment of the disaster response (SecInCoRe Workshop 2015).

Technocratic models of disaster risk management often wittingly or unwittingly exclude important stakeholders or neglect to represent their interests. Vojinović & Abbott (2012) show how in the development of flood protection this can lead to the exclusion of information that is highly decision-relevant. Flood risks arise from the activities of multiple stakeholders and their diverse interests and practices, from land use planning departments to commercial housing developers to citizens buying or renting property, from water utility providers to nature conservationists, from transport developers to agriculture.