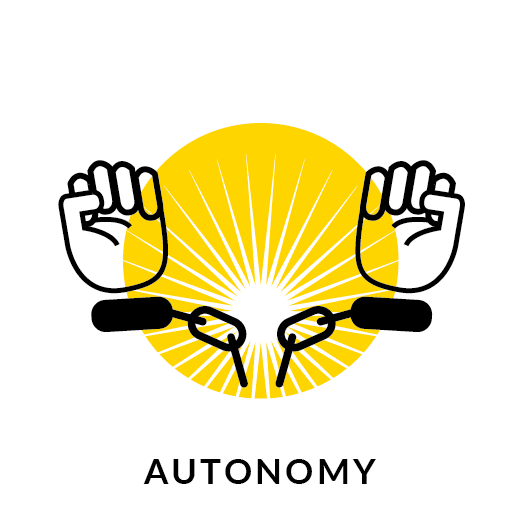 All parties – individuals, organisations, regions, nations – need to be able to maintain autonomy in order to properly collaborate and develop joint responsibility. Collaboration should not require one organisation or community to give up control or lose their voice to achieve a shared ideal. A practitioner should not lose their autonomy to work in their disaster management role for the sake of representing a nation in cross-border politics.

Autonomous machines such as unmanned drones and vehicles, rescue robots, or autonomous algorithmic systems bring with them promises of increased efficiency, safety and interoperability. However, they also bring about ethical questions as they challenge us to rethink key ethical principles such as equality, non-discrimination, transparency, responsibility.

In Western philosophy, the concept of autonomy is deeply rooted in our understandings of the human person and of dignity. The notion of a free willed, autonomous human being lies at the heart of our western liberal democracies. Maintaining autonomy in a partnership is one of the key challenges for every collaborative project. The European Union tries to strike this balance through the principle of ‘subsidiarity’; that is, the principle of devolving decision-making to the lowest possible level whilst supporting coordinative action at a higher level in an effort to support and guarantee local autonomy.

In the digital age, “autonomous” machines and systems – i.e. systems which use big data to inform algorithms through machine learning – come to challenge the principle of autonomy, as it is conventionally understood, as aspects of decision-making in many areas of social life are increasingly delegated to machines. In PPDR, technologies such as autonomous unmanned drones and vehicles, rescue robots,  or autonomous algorithmic systems bring with them promises of increased efficiency, safety and interoperability. However, the European Data Protection Supervisor warns that substituting human deliberation and decision-making for computational or algorithmic optimisation might run the risk of ‘eroding rather than sustaining human potential for autonomy’ (p.17-18) as these processes challenge ethical principles  such as equality, non-discrimination, transparency, responsibility. For example, Eubanks shows how such technologies can exaggerate inequalities as her work brings to light the impacts of data mining, policy algorithms, and predictive risk models on poor and working-class people in America (2018). In light of such shifts, the EDPS calls for a reflection and re-evaluation of the relevance and significance of key ethical principles such as autonomy, and a move towards a digital ethics (2015, 2018).

Jasmontaite, L., Delprato, U., Jager, B., Neubauer, G., and Leuven, K. (2015). Challenges for the Use of Information Technology and Standards in International Disaster Management. Berlin.