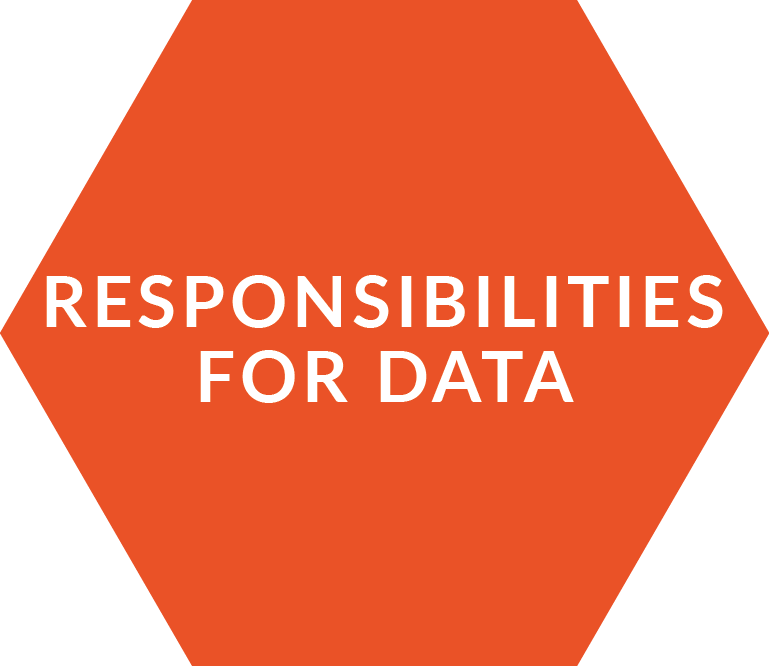 Crisis management models typically contain rules and procedures for the handling of data in order to ease communication and encourage data exchange between different agencies. However, how these rules, procedures and responsibilities are interpreted and acted upon by different stakeholders can widely range. This means that some ethical and legal responsibilities for data may have to be agreed upon before parties participate in a collaborative information management system, while others may need ongoing reflection.

Who is responsible for data in collaborative situations?

Are there any situations in which this responsibility is jointly shared with another?

Who is responsible for data quality and what processes are in place to ensure it?

What processes exist for detecting if the information is not entered correctly?

How is data secured and how can this be known?

What core values are at the basis of stewardship? Is it public safety, data security, community practices, national politics, democracy?

Who is entitled to enter data and who is not? What may other voices matter?

What happens to data that is linked to and shared?

How do you make sure that data is handled in a secure manner (from entry to various uses) How are data protection regulations addressed?

How is access to data logged? If a user accesses data, are they then assumed to know and expected to respond to it?

What is the relevant legal regime if the other agency or part of it is located outside of the EU?

Crisis management models typically contain rules and procedures to be applied across the disaster management cycle that include responsibilities, guidelines, and templates for reporting, data gathering and exchange. The aim is to encourage and ease data exchange and communication between different agencies resulting in an effective coordination of emergency planning and response. This may require data stewardship, that is, a commitment to stimulate collaborative approaches that highlight the value of information to support decision making and build communities around data categories along with teams to maintain currency of the portal. Moreover, once data stewardship is enacted there is a range of interpretations and instantiations of those data rules and models. This means that they cannot be relied upon the different stakeholders to fully understand their ethical or legal responsibilities for data. Some responsibilities may have to be agreed upon before parties participate in a collaborative information management system, others may need ongoing reflection.

In reaction to a perceived failure of data sharing practices after the 2016 Paris terrorist attack, there were calls for more data sharing. However, commentators argue that this may not be the best way forward. In a critical discussion, Didier Bigo, Sergio Carrera, Elspeth Guild and Valsamis Mitsilegas from CEPS – a leading think tank and forum for debate on EU affairs argue that

the fact that the attackers were allegedly ‘known’ by some authorities suggests that more information sharing would do little as a response to events like those that took place in Brussels. This was also the case with the Paris events, in both January and November 2015, which proved that from the perspective of crime fighting, ‘more intelligence’ is not an efficient law enforcement tool for countering terrorism and crime.

What is needed is better instead of more information sharing. The challenge is not so much that information is not shared within the EU or with third countries, or that focus is needed on ways to enable ‘more’ data sharing in the EU. Instead, priority should be given to assessing the reasons why that ‘information’ was not used by the relevant national authorities, to ensuring better targeted and more accountable information exchange, and to boosting EU operational cooperation and joint (cross-border) investigations (2016).