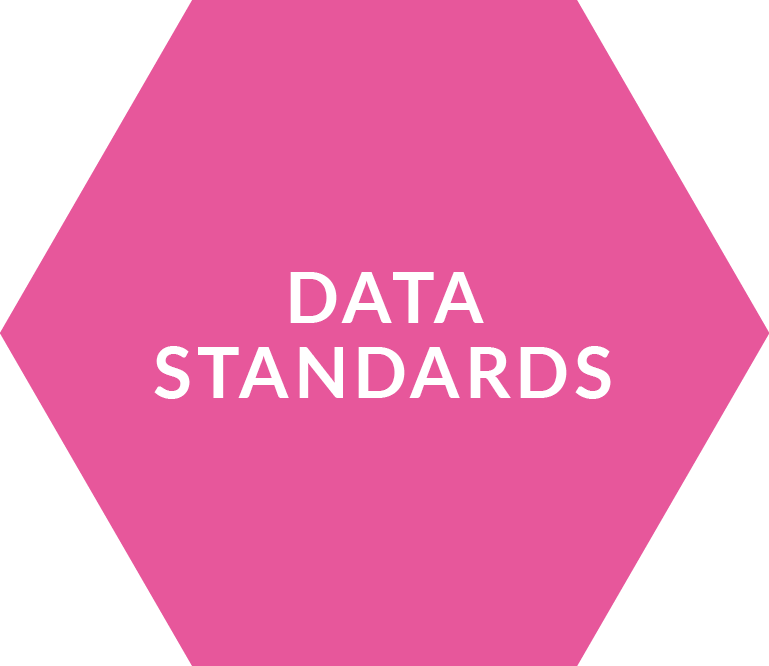 Data standards are the rules and definitions by which content is described and recorded as data. To share or store data there must be standards in order for the various technological systems along the way to be able to incorporate these data during and after the storing and sharing processes. However, one effect of increasing the range of data sources and people interpreting data is a need to create these rules in ways that can be applicable from one situation to the next.  However, just having data in the same format does not mean it has the same meaning for everyone using it. Standards and classification systems are codifications of value systems and social practices and thus these decisions cannot be based, in full, on what is technologically possible but also need to consider the social and ethical implications of the choices made in categorising, classifying, and sorting data for sharing.

Are all relevant stakeholders being included in the creation or adaptation of the data taxonomy?

Is there a review process of the standards, codification, and taxonomy?

How can data standards allow for a diversity of expressions of accuracy, trust, and quality? How can they facilitate the translation between these expressions?

Data standards can provide data integrity, consistency, minimize redundancy, and help clarify ambiguities. They can act as global reporting mechanisms. They make it possible for more than one person to gather and use data. They can also make it possible for technology designers or service providers to better understand the needs of disaster risk management. It is crucial for data protocols, via standards, to be compatible and complementary for cross-border interoperability or the ability to receive direct operational support from other countries.

However, different practices, such as local risk analysis, often are best supported by different standards. It also leads to the need to ensure control of the information chain, from validation of raw data, finding and sharing mechanisms, to processing so as to maintain coherent and reliable information. Moreover, carrying a data standard or classification from one place to another or one situation to another is an act of imposing one set of values onto another, as well as placing potential limits on data use. When working at the intersection of multiple ontological frameworks, the challenge becomes one of determining what type of knowledge gets included into standards and systems of classification in ways that keep diversity and ambiguities with the data. Some of this knowledge cannot be reconciled technologically with rules or via shared standards, but needs constant “intermediation” by liaisons. That’s only possible if there is some level of transparency in the standards, in the system that organises the data for data sharing.

Advanced Mobile Location or Emergency Location Service: With the majority of emergency calls made from mobile phones, using network data to locate the caller gives an accuracy radius of 2km, which can make it difficult to locate callers precisely. The Advanced Mobile Location and Emergency Location Service provide solutions that locate the handset instead of the network, with far greater accuracy. There are efforts underway to standardise these services and access to them at ETSI. Studies have found that if AML was utilised across the EU, lives and up to € 95bn could be saved (EENA Press Release 2017)

Flood Risk Standards: In UK flood risks assessment, data about flooding is gathered with a +20% rule, a rule intended to create a uniform approach to accounting for water flow and future floods. This rule is a standard for scaling historical records of peak flow across data from similarly sized catchments in the UK. However, combined with the models, restricted number of experts, and software used, the rule, which does not change the frequency of flooding, affects the probability of flooding occurring and causes flood risks to be constructed in specific ways. UK Environmental Agency consultants recognised that this impacted their practice. As one stated “‘Models determine what is modelled’ because different models represent different elements of the flood system” (Lane et al: 1801). Models, standards, and individual practices change what questions are able to be asked, and thus the answers. The answers can be so different as a result, different Environmental Agency consultants could provide very different 100 year flood levels for the same catchment.

As another consultant noted: “their flood maps only show their estimates of flooding of water which comes out of rivers because the rivers are overfull. It doesn’t show the flooding caused by water trying to get into the rivers because it rains too much. And a lot of the flooding certainly in places like Hull and part of what happened in Sheffield this summer [2007], was not water coming out of the rivers. In Hull it wasn’t at all. It was water that fell on the ground and couldn’t get into the rivers. And then those maps don’t show that” (Lane et al: 1801-1802).

While the standards framed risk in very particular ways, they did not override the nuances of the models used, software available, and individual expert experience. As a result, two experts discussing the same standards assumed very different risks.

Compiling risks via data standards: In a study examining chemical pollution after Hurricane Katrina, Frickel (2008) compiles data to show how data standards used to define sampling points for legacy chemicals did not match well with where chemical activity had taken place. The legal regulations in the U.S say the Environmental Protection Agency has to check the non-residential areas (e.g. areas where there are factories, etc) that were flooded: look at where chemicals might have been polluted in the flooding. But Frickel found that mixed use areas did not equal non residential. It meant that areas that had in recent history had industrial activity but were now either partially or fully residential were not included in the data standards for sampling points yet were the source of many health problems for an already marginalised population.

CEN. (2017). Water quality in the loop of European Standardization. [Link]

European Commission (2014). Communication from the commission to the European parliament, the council, the European economic and social committee and the committee of the regions on a new EU approach to the detection and mitigation of CBRN-E risks. Brussels, 5.5.2014 COM(2014) 247 final. [Link]